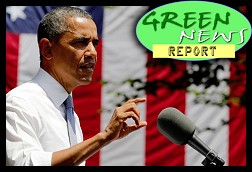 Welcome aboard to the GNR's newest affiliate partner, Netroots Radio!

IN TODAY'S RADIO REPORT: A Green News Special Report: President Obama's historic speech on climate change - his warnings, initiatives, and what it means for the future ... All that and more in today's Green News Report!

IN 'GREEN NEWS EXTRA' (see links below): Dan Savage: 'The War This Time'; Researchers ID organic solar cell materials; Insurers reassess natural disaster policies; EPA abandons study that linked fracking to Wyoming water pollution; Breakthrough: cheaper, better batteries for 300-mile EVs; Record floods in India, Nepal, Calgary; 50k dead bees in OR from pesticides; Houston to get half its electricity from renewables; Ocean seafloor is covered in trash; Megadrought predicted for U.S. Southwest; Volvo tests in-road EV charging ... PLUS: "Goodbye, Miami": as the seas rise, there will be chaos... and much, MUCH more! ...

President Obama: 'We don't have time for a meeting of the Flat Earth Society'

I will believe it when I see it, because there have been mostly flat earth meetings for a long time.