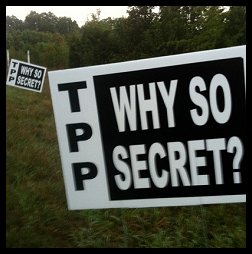 "The TPP is nicknamed 'NAFTA on steroids.'", Rep. Alan Grayson (D-FL) wrote in a recent email to supporters, explaining what he saw after being allowed to review some of the text of the new, extremely broad, and very classified trade agreement being hammered out behind close doors. "Now that I've read it, I can see why," he added.

His email suggests just how far down the secrecy rabbit hole our nation has traveled, not just in our massive classified surveillance state, parts of which are presently being revealed by former NSA contractor turned whistleblower Edward Snowden, but even in our so-called "free trade agreements" being negotiated, supposedly, on our behalf.

As Grayson warned after reviewing part of the new agreement last month: "There is no national security purpose in keeping this text secret...This agreement hands the sovereignty of our country over to corporate interests"...

Last month, in "Please Don't Notice the Global Corporate Coup", we discussed how the Obama Administration has quietly sought "fast track authority" to secretly negotiate and ram through Congress the Trans-Pacific Partnership (TPP) --- a NAFTA-like "free trade" agreement that not only reportedly threatens our national sovereignty, but aspires to supplant the sovereignty of all participating nation-states with a privately-controlled, all encompassing, global corporate "investor state," according to leaked pieces of the agreement.

The "investor state", in this case, references the treaty's creation of arbitration tribunals which are granted the power to negate the effectiveness of laws passed by the individual nation-states that are parties to the treaty. Under the guise of so-called "free trade agreements," multinational corporations are allowed to by-pass the legislative process and democratic accountability in the nations that sign onto the TPP. The result, as we explained in our detailed coverage last month, is the undermining of Internet freedom, environmental laws and regulations, and local laws protecting the health and safety of the citizenry of all nations who participate in the trade agreement.

Grayson's email announced that, due to pressure in the form of 10,000 comments submitted in opposition to the TPP, the United States Trade Representative (USTR) "finally let a member of Congress - little ole me, Alan Grayson - actually see the text of the Trans-Pacific Partnership...a large, secret trade agreement that is being negotiated with many countries in East Asia and South America."

Grayson reportedly told an audience recently that he was allowed to "see exactly one document in his office in early June with the provision that no one on his staff can be there and that he can’t take any notes and he only has a limited time in which to view the document."

In his email to supporters, he wrote:

The TPP is nicknamed "NAFTA on steroids." Now that I've read it, I can see why. I can't tell you what's in the agreement, because the U.S. Trade Representative calls it classified. But I can tell you two things about it.

1) There is no national security purpose in keeping this text secret.

2) This agreement hands the sovereignty of our country over to corporate interests.

3) What they can't afford to tell the American public is that [the rest of this sentence is classified].

(Well, I did promise to tell you only two things about it.)

Grayson may be the only member of Congress who has been privy to the agreement, but he is not the only American, outside of the Obama Administration, who has seen the TPP.

Public Citizen's Lori Wallach and Ben Beachy wrote in their recent New York Times editorial, that the terms of the TPP have not been hidden from all Americans. A "group of some 600 trade 'advisers,' dominated by representatives of big businesses…enjoy privileged access to draft texts and negotiators."

Public Citizen, a non-profit good government watchdog group describing itself as committed to "defending democracy against corporate greed," calls the TPP "a tool of the 1%" that would "offshore millions of American jobs, free the banksters from oversignt, ban Buy America policies needed to create green jobs and rebuild our economy, decrease access to medicine, flood the U.S. with unsafe food and products, and empower corporations to attack our environmental and health safeguards."

The group has recently published a petition citing Sen. Elizabeth Warren (D-MA)'s call for transparency for the TPP, after she received a response from the U.S. trade office claiming that --- as summarized by Public Citizen --- "if it were made public, it could not get the deal done".

In response, Warren said, "If transparency would lead to widespread public opposition to a trade agreement, then that trade agreement should not be the policy of the United States."

The Public Citizen petition goes on to state:

We demand the public be able to see what’s in the Trans-Pacific Partnership (TPP). Negotiations have been going on for more than three years, the deal is slated to be signed in October and to date, Americans have been kept in the dark. This nearly-completed TPP agreement would change every aspect of our lives. The only information we have is from leaked texts which reveal the worst job-offshoring corporations, major global banks, agribusiness and pharmaceutical giants want this deal to be a corporate power tool with unprecedented attacks on our most basic rights and needs.

It is totally unacceptable to deny the American public access to the text of the draft of the TPP agreement. We stand united calling for the immediate release of the text.

Yet another fact prvoing the US federal government is an OUTLAW government, which means it is 100% illegitimate and must be done away with, with its officials tried for treason.

What law is the federal government breaking here, as you see it? (And, of course, Treason is defined in the Constitution as aiding/abetting enemies in a time of war as declared by Congress, so Treason wouldn't be pertinent here.)

It isn't secret to the NSA.

They are the military folk who create our rights.

So, until the military bitches what is the prob bro?

The are out getting more of the stuff we are made of, that is all.

Hey karlof1, what part of sovereign nation don't you understand? American exceptionalism has gone too far. It creates terrorism instead of fighting it, because the way to fight terrorism is to help create a better world. We are creating a better world for multinational corporations...not people with our unbound military foreign policy! And oh yeah, why is it that the USA would not sign on to the International Arms Treaty? And how many more dead Americans will it take to get REAL gun law passed?

"Fast track" itself is unconstitutional, it seems to me, as Congress is given the responsibility in the Constitution of regulating foreign commerce.

Isn't it also clear that under this agreement an arbitration tribunal could extensively override federal law? At some point (this point, actually) we have to say the Constitution cannot be legislated out of existence whether we are speaking of Section 1, Article 8; the judiciary function; or the 4th Amendment (re: NSA).

Brad's definition of treason is correct.

Treason, under Article 3 of the U.S. Constitution applies only to disloyal acts committed during times of war.

Espionage committed on behalf of an ally does not amount to treason.

The crime of treason requires a traitorous intent. If a person unwittingly or unintentionally gives aid and comfort to an enemy of the United States during wartime, treason has not occurred. Similarly, a person who pursues a course of action that is intended to benefit the United States but mistakenly helps an enemy is not guilty of treason. Inadvertent disloyalty is never punishable as treason, no matter how much damage the United States suffers.

What we do have in elected officials who secretly conspire to surrender the sovereignty of the United States to corporate power is an extreme violation of the oath of office, which commands all employees of the federal government to protect and defend the U.S. Constitution against all enemies, foreign and domestic.

Is it accurate to describe those who are seeking to secretly supplant the very foundations of Constitutional democracy with a privatized, global investor state as domestic enemies of the U.S. Constitution?

I believe it is.

Oooops Earnest, I guess kudos go to you. But seriously folks, our government is taking metadata world wide, and I barely hear crickets? WTFO? The O stands for over? What a nasty way to be in the world.

Where the hell does John Bolten stand on this?

Actually, I could care less.

This is scary stuff!

Ummm. the corporate coup has already happened...Why does anyone think different? the Evidence is there for all to see...ALEC, and the Chamber of Commerce are the front line Corporatistas...In the States, and in DC...there are a few fading lights of hope who are concerned with the return of democracy to us...This is the final nail in our Republic's coffin...the rest is all deception, and deflection...

WHOAAAAAAAAAAAA, what we are seeing happening in Egypt is a glimmer of hope for PEOPLE. I do pray its not a military shuffle of the deck, but is might for the right of all PEOPLE. It may be the Democratic inclusivity of ALL PEOPLE COMING TO RESPECT FOR THE OTHER. Violence should be understood and documented as to who actually does it and what their motives really are. People have the power to come together to make a better world!!!!!

You know if a thousand or more people(supporters) stood behind a congressman and/or senator as they hold a press conference to release all of what they know to be in violation of the Constitution (in accordance with their oath of office), the deal could be outed and stopped. But what are the odds that such an elected representative still exists in office. Only a movement of support by the people will get in the way of the oligarchs to ripping the rest of us off as they loot the nations of the world.