Guest Blogged by Ernest A. Canning, with Brad Friedman

He details the striking difference in the corporate media coverage of the two races, where Florida 2000 was both much closer and, as it would determine the Presidency of the United States, arguably more 'important' to get right, and yet the constant media framing continuously painted Al Gore as a "sore loser" for not bowing out 'gracefully' or 'admitting defeat' in the days following the razor-thin election (which, as we would learn later, Gore had actually won, having received more votes across the state of Florida [PDF] than George W. Bush, had the U.S. Supreme Court not kept the ballots from actually being counted).

From the New York Times to AP to MSNBC, and even Democracy Now! et al, despite all countable ballots having now been counted, and clear rulings having been issued by both the MN Supreme Court and the bipartisan three-judge panel overseeing the contest, the media seem to have developed an aversion to using the "L" word --- loser --- in their coverage of the MN contest. Perhaps it's because they're listening to only one side of the argument (Coleman's), but the facts of the case, and the many clear court decisions, leave no question that Franken is the winner, and Coleman is the loser. So why won't they say so?...

Author and former radio talk show host Al Franken, the Democratic challenger for the U.S. Senate seat in Minnesota, will be the state's next U.S. Senator, according to a final tally by the bi-partisan three-judge panel overseeing challenger Norm Coleman's election contest against him.

This morning in St. Paul, officials from the Minnesota Secretary of State's office, under the in-court direction of the three-judge Election Contest panel in the former Senator's contest against Franken, tallied all remaining lawfully cast absentee-ballots that were not previously opened and counted. This was done on camera, in open court. The attorneys from both sides, along with the media, were all present.

The final tally of the remaining ballots was 198 votes for Franken, 111 votes for Coleman and 42 votes for "other." When this is combined with the initial 225 vote lead, certified by the bi-partisan State Canvassing Board in December, it adds up to a 312 vote Franken victory, arrived at by both a transparent, post-election hand-count late last year, and the additional tallies added under the painstaking care exercised by the three-judge panel in Coleman's three-month long contest trial.

Al Franken has now won the U.S. Senate seat, but do Coleman's promised appeal(s) stand a chance of winning? And will the Democrats in the U.S. Senate now assume their Constitutional right to dutifully seat the Senator from Minnesota?...

In my previous piece, "Prosecute or Perish", here at The BRAD BLOG --- in which I argued that criminal investigations and, where appropriate, prosecutions of the Bush/Cheney cabal for war crimes was not merely mandated by our treaty obligations but vital to preserving our constitutional democracy and the rule of law --- I referenced an allegation by Seymour Hersh that the Bush regime had created a highly secretive "executive assassination ring" which reported only to Dick Cheney's office and which had "been going into countries, not talking to the ambassador or the CIA station chief, and finding people and executing them and leaving."

How can a nation that calls itself just convict the Japanese officers who waterboarded my father, yet refuse to so much as investigate high officials from our own government who authorized the same war crime and, as newly alleged, even much worse...

( 5 so far... )
Article Categories: Dick Cheney, Rights And Freedoms, U.S. Constitution, Accountability, Torture, Bush Legacy
Prosecute or Perish
Why the survival of our Constitutional Democracy may hinge on factually justified criminal prosecutions of the Bush/Cheney cabal...
[UPDATED: Spanish prosecutors file complaint calling for arrest of Bush 'torture attorneys']
By Ernest A. Canning on 3/25/2009 5:05am PT 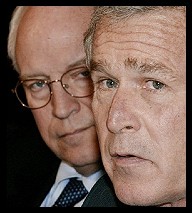 "It will remain one of democracy's best jokes that it provided its deadly enemies with the means by which it was destroyed." - Joseph Goebbels

Gradually, as the veil of secrecy lifts, a growing number of Americans are beginning to comprehend the lawlessness of the cabal which seized control of the White House in 2000 in what amounted to a judicially-aided coup d'etat.[i] This lawlessness extended across the board. It included the packing of federal agencies with lobbyists from industries they were designed to regulate, deception to take this nation into a war of choice, fraudulent no-bid contracts, torture, extraordinary rendition, warrantless NSA eavesdropping on the entire stream of domestic electronic communications, and, if Seymour Hersh's recent allegations are accurate, the creation of a highly secretive "executive assassination ring" which reported only to Dick Cheney's office and which had "been going into countries, not talking to the ambassador or the CIA station chief, and finding people and executing them and leaving."[ii]

The reaction of leading Democratic politicians to these unprecedented high crimes has been ambivalent, at best. Even before she assumed the role of Speaker, Nancy Pelosi announced that impeachment was "off-the-table," thereby enabling two more years of executive lawlessness, not to mention the nation's economic demise. Pelosi evaded so much as mentioning their high crimes until February 2009. President Obama acknowledged that "no one is above the law," but added that the focus of his administration is to look forward, not back.

There are fundamental deficiencies in the President's formulation. First, it is impossible to observe the rule of law without looking back. It would make no sense, for example, for a man charged with armed robbery to come before a judge and say, "Well, the robbery was in the past. You've got to look forward. I have every intention of abiding by the law in the future. So why prosecute me?" Second, looking forward does not mean handling current events at the expense of the rule of law. The point is to look far enough into the future to appreciate that the same people who brought us the last eight years of executive lawlessness could one day return to power...

In support of the motion to dismiss, Franken attorney Marc Elias argued that Coleman had filed a "scattershot petition"; that in five weeks Coleman called more than 50 witnesses, placed in evidence thousands of pages of material, yet proved little more than a handful of previously-rejected absentee ballots should be opened and counted.

Moreover, Elias noted that eight of Coleman's original claims had been abandoned, pointed out that the court had previously ruled the parties had a burden of proving, on an individualized basis, that any previously-rejected, uncounted absentee ballots were lawfully cast, and thus, should now be counted.

Elias argued that while Franken was certified by the state canvassing board, at the end of the painstaking post-election hand-count, to have received 225 more votes than Coleman, the Coleman team, he said, had presented individualized evidence with respect to no more than nine (9) absentee ballots. Though, in the case of ballots cast by voters who did not appear to be registered, Elias conceded the Secretary of State had indicated, there may be as many as 100 ballots in which missing registration forms might be found inside the absentee ballot secrecy envelopes.

Elias argued that while trial courts ordinarily prefer to defer a ruling on a motion to dismiss until after both sides present their case, the expeditious nature of the proceedings and exigencies warrant an immediate dismissal, even before his team's own case is concluded...

( 5 so far... )
Article Categories: Election 2008, Minnesota, U.S. Senate, Al Franken
Dead In Its Tracks: An Anatomy of Norm Coleman's Failed Effort to Contest MN's U.S. Senate Election
Sanctions are now warranted against the former Republican Senator, according to the legal analysis of a veteran attorney and political science scholar...
By Ernest A. Canning on 2/22/2009 2:05pm PT

Guest Editorial by Ernest A. Canning

I am a California attorney. After 31 years of practice, I find myself in the enviable position of semi-retirement. As my practice winds down, I have had the luxury to follow the Coleman election challenge closely, both reading court filings and watching a good deal of the proceedings. I consider The BRAD BLOG the most extensive and thorough source of the dangers of E-voting. I felt, however, it would be useful to provide a legal analysis of the present state of the Coleman challenge.

Brad Friedman's described the latest effort by team Coleman to challenge absentee ballots it had previously agreed were properly opened and counted, as a "flip-flop,". While accurate, the term does not begin describe the deep legal dilemma now faced by Norm Coleman's attorneys in the U.S. Senate election contest in Minnesota...